Skip to content
NOTE — As ContentScanner class is under refactoring, the development of 0.1.3 version is temporarily frozen.

Since its earliest versions, PDF Clown has been shipped including a simple Swing-based proof of concept for viewing PDF file structures. Now that little fledgling is going to become a comprehensive tool for the visual editing of the structure of PDF files: PDF Clown Document Inspector. It was initially planned to be part of 0.1.2 version as a dedicated project within the PDF Clown distribution, but approaching the release deadline it wasn’t ready yet.

This tool conforms to the PDF model as defined by PDF Clown (see the diagram above), which adheres to the official PDF Reference 1.7/ISO 32000-1. This implies that a PDF file is represented through several concurrent views which work at different abstraction levels: Document view (document layer), File view (file/object layer, hierarchical) and XRef view (file/object layer, flat).

Document view (see the left pane in the above screenshot) shows the high-level structure of a PDF file; selecting a node, its data is shown in the right pane through several views — in this case, selecting a page node shows its content stream structure (Contents view, see below) and its rendering (Render view [¹], see above). Note that the page model represented by both Contents view and Render view corresponds to the content (sub)layer described in the diagram above. 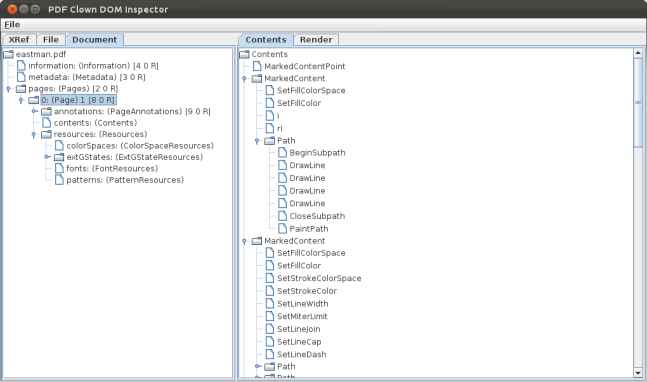 Here it is just one of the possible functionalities: hovering the mouse pointer over a show-text-operation node, a tooltip pops up revealing the actual text encoded inside it (in this example, inspecting a russian-language document):

There’s such a potential for custom features that I’m considering to make it pluggable so as to let it be extended with additional modules, at user’s will.

File view shows the low-level representation of the same entities you found in the above-mentioned Document view, expressed as primitive objects like dictionaries (PdfDictionary), arrays (PdfArray), streams (PdfStream) and so on.

XRef view lists the entries of the cross-reference index (either table or stream, but that’s a technical detail you can happily ignore as it’s transparently handled by the library).

It’s really interesting to note that all the views (Document, File, XRef) are always kept synchronized: when you select a node in one of these views, its corresponding entities in each of the others are automatically selected, allowing to seamlessly switch from one view to another.

[¹] Rendering is still partial as it’s under development (pre-alpha stage).

PDF Clown is a general-purpose PDF library focused on the rigorous implementation of PDF 1.7 specification (ISO 32000-1).

Copyright © 2015 Stefano Chizzolini. Use of this site signifies your acceptance of its Terms and Conditions.